I make a lot of Mexican food…. so what. It’s delicious.

If you crave the taste of fish tacos from your youth, then go with these. If not, we’ve got a chickpea version for you that’s just as awesome.

Bet you never thought you’d have anything remotely fish-like again being vegan, did you? Well you can if you want…. believe it or not, we found gf vegan breaded “fish” in our local health food store. It’s made of soy and something that starts with a “k”… I think it’s some kind of yam. Anyway, it’s pretty yum. Here’s how to make those:

Heat up your “fish” in the oven for about 10 min, and dice into strips. Warm tacos in oven for about half that time. Layer your taco with fish first, then tomatoes. Mix Veganaise and pepper (to taste), and layer that on. Then add your chopped onions and cilantro. Take a bite. Mmmmm. 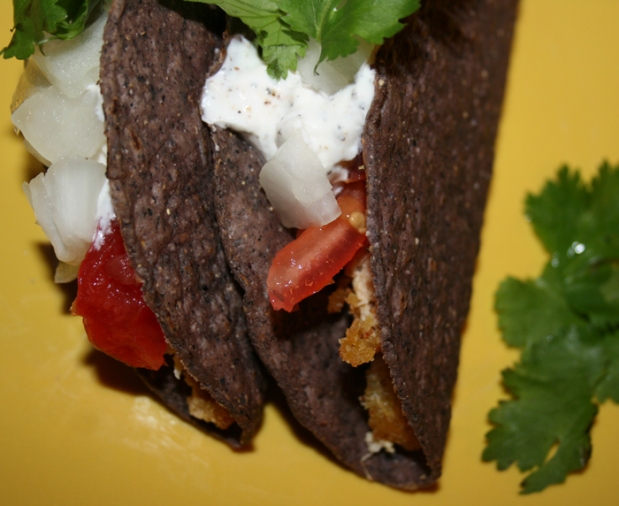 If those don’t sound good, or you just wanna give it a whirl, go for the chickpea tacos. They’re not just for chicks.

For these, you will need:
~1/2 can chickpeas
some chili powder
cilantro
coriander or cumin
diced bell peppers
diced tomatoes
diced onion
Tofutti sour cream
and whatever else you want, like yummy tomatillo salsa.
oh, and the taco shells.

Throw it all in a skillet. I think you can figure this one out. 🙂
(If you can’t, just layer it all in the shell after the bell peppers look soft.)

My boyfriend even had to show me up and create a Mixed Fish/Chickpea Taco Supreme – both soft and crunchy at the same time.

What do you think?! 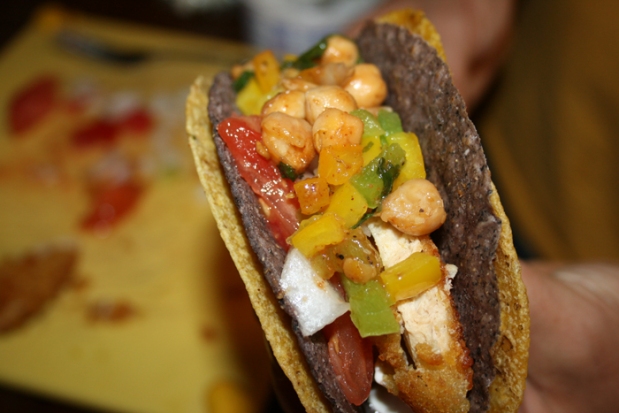 Have a happy vegan taco night.

← How to Be a Gluten Free Vegan
Sorrel Mashed Potatoes, Grilled Pear Parfait →